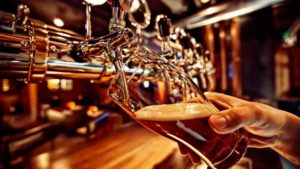 In theory, brewing beer is not difficult. Enthusiasts are known to produce their own brew using a few buckets in the basement. In fact, similar to star chefs, a few of the most accomplished brew masters started that way and worked their way up to become famous master brewers.

More often though, in Germany aspiring brewers start their professional career by going through vocational training at a brewery for 3 years. After all, beer is only as good as the people who make it. In Germany, brew masters are required to learn about many topics such as raw materials, purchasing, production and machine knowledge. The latter is especially important, because in most modern breweries, all processes are computerized and automated.

However, in the end, it is the brewer who is making the decisions and it is his or her knowledge of microbiology, botany and biochemistry that is creating a quality product. This is especially true for craft breweries where brew masters are able to be really creative. Just like master chefs, brew masters can create new and never before tasted creations of beer, combining, for example hops from Germany with local ingredients to make small batches of gourmet beer.

But no matter if you are working as a brewing engineer in a large brewery, or as a master brewer in a gourmet craft brewery, high quality and consistent ingredients, like hops from German cultivation that has been certified by the European Union, are equally important.