A visit to the hops museum in Wolnzach, Germany 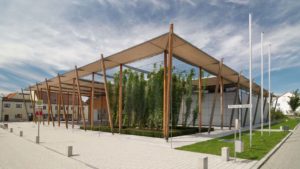 Wolnzach is located in the south of Germany, in the heart of the Hallertau region. Hallertau is the largest continuous hops growing area in the world. Since hops cultivation is such a large part of the economy and daily life in the Hallertau region, it made sense to create a museum dedicated to hops in Wolnzach.

Its architecture features an artistic representation of the tall poles that are used for hops cultivation. They have been around almost unaltered for a long time, but hops planting, harvesting and packaging has seen some dramatic changes over the years. It is this long tradition of hops cultivation that is represented in the exhibitions at the German hops museum in Wolnzach.

There are three main areas in the museum that document the history of hops in Germany. The first one shows the beginnings of how hops were utilized in Germany as early as 1000 years ago. Early botanists discovered the healing powers of hops and used it to make medicine.

The second main exhibition topic is centered on the early ways of hops cultivation, harvesting and ‘hops pickers’, the people who harvested the green gold. Different displays are showing the work of hops farmers and their work throughout the year.

The third area of the German hops museum is dedicated to German quality hops as a commodity that is sold and traded all around the world as well as beer making. This commercial activity left its mark on the area and as a testament to its history, the living room of one of the first large hops traders has been recreated.

Visitors of the museum do not have to beer lovers, the material is very well suited to anyone who wants to get an inside view of the history of hops from the early beginnings to today. Guided tours and beer tastings round out the enjoyable experience for visitors.