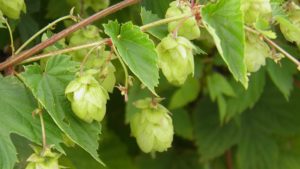 Many people know about the use of the ancient art of Chinese Traditional Medicine (TCM). It comprises a set of practices that include acupuncture, exercises, and herbal medicine. This form of medicine is based on traditions that date back more than 2,000 years.

Some TCM plants common in China can even be found in German shops and pharmacies, such as ginseng and garlic. Indeed, just like China, Germany also has an abundance of traditional, time-honored plants that contain medical properties. Some examples of German plant medicine are chamomile and peppermint, thyme, the humble pumpkin and hops. In 2007 hops was even the medical plant of the year in Germany. Because hops are so versatile in their properties, some people consider it the equivalent of a green Swiss army knife. It has been used for centuries for brewing beer and Germany is one of the largest producers of high-quality hops.

As medicine, hops are used as a mild sedative. Sometimes, they are mixed with other relaxing plant extracts and served as a tasty tea. Unlike many TCM, hops do not need to be cooked in a clay pot for several hours.

The importance of hops was originally reached by the fact that its bitter substances contributed to the durability of the beer due to its bactericidal activity.

Further information about hops as a medical plant can be found at the following link: