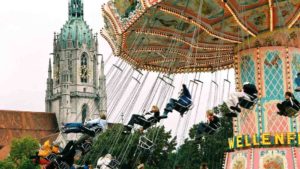 Some people call it a happening, some call it crazy, but it is certainly the largest and most renowned folk festival in the world – German Oktoberfest. Since 1810 it is held every year from the end of September until the beginning of October in Munich, the state capital of Bavaria.

Traditionally, the beer at the fair is handed out in enormous glasses and consumed in one of the many large tents. Each tent features a typical Bavarian musical group. They sing in Bavarian dialect and are dressed in traditional Bavarian outfits. Lately, many visitors and celebrities attending the fair also like to dress up for the occasion and wear fashionable traditional Bavarian clothes, such as leather shorts and colorful dresses for women.

Culinary specialties that are part of every visit to Oktoberfest are roasted chicken, grilled ham hocks, cheese noodles and the famous white sausages, all of which are prepared Bavarian style.

In addition, Oktoberfest features a multitude of rides and attractions that are not for everyone, but certainly have a lot of entertainment value even for bystanders. There are roller-coasters with five looping, traditional carousels of every type, and unusual rides such as the ever popular Devil’s Wheel. It consists of a large horizontal disc where riders can sit or lie down. As the wheel starts to spin ever faster, the riders have to try to hang on as long as possible.

The Oktoberfest in Munich is an important part of Bavarian culture. Each year, Oktoberfest attracts more than 6 million visitors. It is difficult to imagine this would have been possible without superior Bavarian beer. Every year, more than 7 million liters of the ‘yellow gold’ are served during the festivities. At the same time, the ever growing demand for beer during Oktoberfest is a testament to the outstanding quality of German hops.