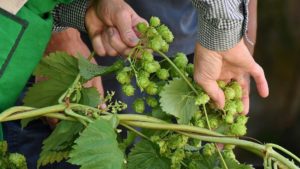 In 2017, Germany produced slightly less hops and alpha acid than in the record year of 2016.

The total harvest will be approximately 41.556 metric tons. In 2016, German hops farmers produced 42.766 metric tons of hops.  That is about 3% less year-on-year. The largest part of the German hops harvest has been produced in the Hallertau region in Bavaria. The total amount harvested there in 2017 is about 35.540 metric tons.

Despite the satisfying hops harvest in Germany, the German alpha acid yield was below the long year trend. This picture is mainly the same all across Europe in Czech Republic, Poland and Slovenia. On the other hand, hops and alpha acid yield in the US was above average.

The slightly lower amount of hops harvested in 2017 in Europe can be explained by inclement weather. Unusual frost in late spring, as well as very dry conditions and hot weather starting in June took a toll on the hops. Only the plentiful rain in late July prevented further damage to the plants. On the up side, the German hops harvest is mostly free from disease and insect derived damage.