Carnival and beer in Germany 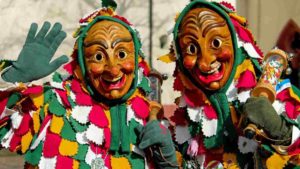 In daily life, but also during the many festivals and festivities, beer is part of the enjoyment. Recently, one of those festivities took place in Germany and delighted the crowds. Every year in February, ordinary people dress up, and celebrate almost a week of crazy German carnival.

The main event is the street carnival that takes place in the period between the Thursday before Ash Wednesday and Ash Wednesday. Carnival Thursday is called Altweiber Fastnacht (Old women’s day) in Düsseldorf. Street carnival is mainly celebrated in following cities Cologne, Düsseldorf and Mainz. In many places “fools” dressed up in crazy costumes take over city hall or the municipal government and “wild” women cut men’s ties wherever they get hold of them.

Also, as a tradition, women are allowed to kiss every man who passes their way. On the following days, there are parades in the street organized by local carnival clubs. The highlight of the carnival period however is Rose Monday (Rosenmontag). Although this day is not an official holiday in the Rhineland area, most public life comes to a halt and almost all workplaces are closed.

The biggest parades are on Rose Monday, the famous Rosenmontagsumzug (Rose Monday Parade), e.g. in Cologne, Düsseldorf, Mainz, and many other cities. During these events, hundreds of thousands of people celebrate in the streets, even if temperatures are low, most of them dressed up in costumes.

Of course, beer is part of the festivities. It is consumed in the streets and at many of the private parties that are traditionally organized by many people.