The history of hops 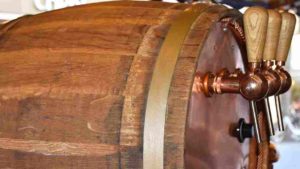 The first documented hop cultivation was in 736, in the Hallertau region of in Germany. At the time already many monasteries were using hops for making beer.

During the 13th century, brewers experimented with other herbs, such as gruit, as bittering agents in beer. This practice ended by the introduction of the German purity law in 1516. It banned all other bittering agents and essentially cemented the role of hops as the only beer flavoring ingredient. The purity law stipulated only water, barley and hops were allowed as beer ingredients. At the same time, the purity law laid the foundation for beer as we know it today.

Harvesting hops was very labor intensive which meant hop-growing had a big social impact. Around the world, the labor-intensive harvesting work involved large numbers of migrant workers who would travel for the annual hop harvest. Whole families would partake and live in hoppers’ huts. In Wolnzach, Germany, the Hops Museum has documented the life of early hops farmers and their way of life. Today, planting and harvesting hops are still a team effort, but the introduction of mechanized harvesters makes the effort easier and faster.