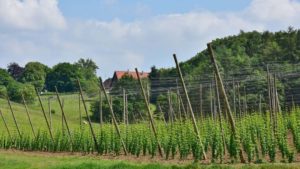 The hops harvest of 2016 has been completed in Germany’s hops growing regions. It has been a relatively mild summer in Germany with temperatures that rarely reached 30 degrees Celsius. With enough rainfall, the hops plants were able to grow in ideal conditions.

Due to the increase of hops growing areas and favorable weather, the hops harvest 2016 has reached about 42.766 metric tons. This is the largest amount for the last 23 years and about 50% more than 2015, a year that saw less than ideal weather for hops plants. Since 2014, the area of hop growing in Bavaria is steadily increasing. In 2016, the hops planting area increased by 4,1 percent. In total, Hallertau, Elbe Saale, Tettnang, Spalt and Bitburg/Baden has now 18.599 ha of hops fields.

In the hops growing region “Elbe-Saale” about 2.950 metric tons of the “green gold” as hops is also called, were harvested in 2016. The region has about 1.409 hectare of hops cultivation. The region comprises areas in the German states of Saxony-Anhalt, Saxony and Thuringia.

For the most recent hops harvest in Germany, aroma hops accounted for 52 percent. The remaining 48 percent are bitter hops.