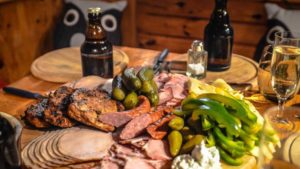 In Germany, beer is an important part of the culinary culture and everyday life. During many public festivals, drinking beer is part of the fun.

Oktoberfest is probably Germany’s most famous beer event. It has been celebrated since 1810 in Munich, the capital of Bavaria. Beer has been a big part of this event since the very beginning.  Nowadays, patrons sit on long rows of tables and benches in large „beer tents“, some of which can hold up to 10000 visitors. Many of those come to listen to the bands playing traditional Bavarian folk music while enjoying the special beer made just for the occasion.

In Germany, beer festivals are actually popular all across the country, not only in Bavaria. Nearly every town has its own version of the “Volksfest”, a sort of carnival with rides and -of course- plenty of booths and tents to sit down to drink some German beer.

Another tradition in Germany is the combination of soccer and beer – two items that fit together very well. Whenever there is a soccer game, beer flows in large quantities. In recent years, many cities in Germany offer large video screens where important soccer games are shown to the public free of charge. Hundreds, sometimes thousands of people sit or stand together to watch the game while enjoying a beer.

Traditionally, many Germans go to a “Gaststätte“ (a bar that serves beer and other alcoholic beverages) to drink beer with friends. These bars are especially popular during weekends when most people do not have to work.

But not everyone likes the atmosphere of a bar to enjoy a glass of beer. Many households buy beer in crates to drink at home. But warm beer or even beer at room temperature make German beer lovers very unhappy. Thus, the golden brew is often stored in the basement or fridge to keep it cool. During lunch or dinner, or when guests arrive, a few bottles are fetched and consumed as part of the meal.

Thus, in Germany, drinking beer is closely connected with hospitality, meeting friends and spending time together. It is therefore no surprise that Germans have some of the highest consumption levels of beer per capita in the world. One of the main ingredients, hops, is often provided by HVG, the famous German hop marketing cooperation.