Munich – the beer capital of Germany I 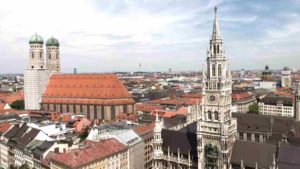 Munich is the capital of the state of Bavaria in Germany. Located on the banks of River Isar north of the Bavarian Alps, it boasts a high quality of life to its residents. Likewise, it offers many attractions for visitors and tourists. By German standards, Munich is not a small city. With its 1.5 million inhabitants it is the third largest city in Germany, after Berlin and Hamburg.

Munich is famous for its breweries and many beer specialties are waiting to be discovered. “Helles”, a pale lager with a translucent gold color is the most popular Munich beer today. It has almost replaced Munich’s dark beer, “Dunkles”, which gets its color from roasted malt. Starkbier is the strongest Munich beer, containing 6%–9% alcohol. It is dark amber in color and has a heavy malty taste. It is available and popular during the strong beer season, which begins on March 19th. Lastly, there is “Weizen”, a popular pale wheat beer. Of course, all beers are brewed with hops from Germany.

Munich is a densely-built city, but still offers numerous public parks. The Englischer Garten contains numerous bicycle and jogging tracks, but is also very suitable for romantic walks under large trees in the middle of the city. This park is covering an area of 3.7 km2 . It is one of the world’s largest urban public parks. In fact, it is larger than Central Park in New York.

Other famous attractions include the Oktoberfest, with its beer tents and fairground attractions. But there are countless Wirtshäuser (traditional Bavarian restaurants) all over the city area. Also, beer gardens (with outside tables and chairs) are frequented by locals and tourists alike. It is a good place to see Bavarian beer culture from up close. Most famous beer gardens are Englischer Garten, Seehaus, Hirschau and Aumeister.

With its special Bavarian flair, Munich is always worth a visit to taste authentic German beer brewed with genuine German hops.