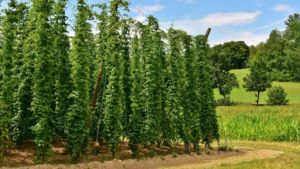 The Hop Research Center in Hüll, Germany, is a research institution focusing on advances in hop breeding, hop harvesting, and hop chemistry. It is located in the Hallertau, the largest continuous hop-planting area in the world, in the German state of Bavaria. The institute is run by the German Hop Research Society and the Bavarian state.

In response to the global craft beer movement, the institute introduced several “special flavor hops”: Hallertau Blanc, Huell Melon, Mandarina Bavaria, and Polaris were released in 2012, and Callista  and Ariana in 2016.

Ariana is especially useful for producing unique craft beer flavors. Accordingly, Ariana can be described as pleasantly mild with impressions of red berries, and sweet fruits (peach, pear, tropical fruits). During systematic trial brews, this hop type demonstrated it can convey various aroma notes, depending on beer type and dosage. Aromas include: grapefruit, geranium, gooseberry, citrus, and vanilla. This hop variety is very suitable for use in dry hopping.