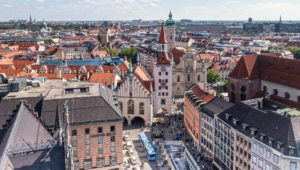 If there is one city in Germany that can be associated with beer made with German hops, it must be Munich. German hops are protected by the EU and are products of origin. German hops are displaying the EU quality labels PDO (Protected Designation of Origin) respectively PGI (Protected Geographical Indication).

Munich is famous for its breweries and many beer specialties. One of them is wheat beer (German: Weizenbier). Another one is Munich’s dark beer (German: Dunkles), which gets its color from roasted malt. It was the typical beer in Munich in the 19th century. Today, the most popular beer is ‘Helles‘, a pale lager with a translucent gold color.

Many places invite guests to enjoy a glass of slightly chilled Bavarian beer. You can go underground to explore some of Munich’s old beer cellars, such as Augustiner-Keller (near the main train station), Hofbräukeller or Löwenbräukeller.

Above ground, there are countless Wirtshäuser (traditional Bavarian ale houses/restaurants) all over the city area, many of which also have small outside areas. Biergärten (beer gardens) are the most famous and popular fixtures of Munich’s gastronomic landscape. They are central to the city’s culture and serve as a kind of melting pot for members of all walks of life, for locals, expatriates and tourists alike. It is allowed to bring one’s own food to a beer garden, however, it is forbidden to bring one’s own drinks.

Munich is located in the heart of Europe, about equally close to Switzerland, Austria and the Czech Republic. It is the mixture of green surroundings and urban charm that creates a very high quality of life for citizens and tourists alike.